Adriano Zumbo aka macaron master aka "that cake guy from Masterchef" has developed an immense reputation and following as the master patissier in Sydney. 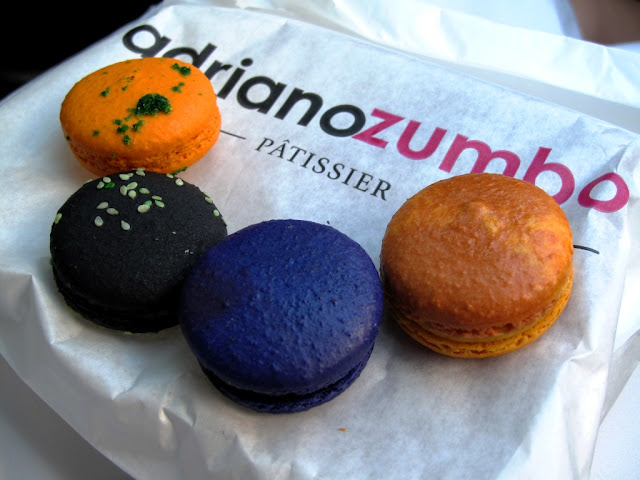 His signature "dish" is the macaron .....and no, it is not "macaroon" which is a meringue-like baked cookie. 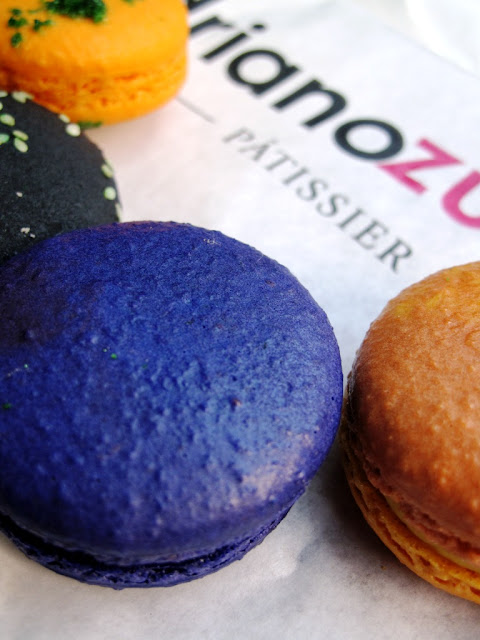 The queue has been perennial in his original Balmain store....often for the macarons. While we have wanted to experience this macaron sensation for a while, we were often deterred by the long queue outside the original store.. I guess it's our lucky day today because while Tong was doing her real estate excursion in the inner west, we chanced upon the Zumbo cafe aka the Zumbo Lab (made popular by Zumbo's TV show) in Rozelle. The small 9 seater cafe serves a selection of patisseries, pies, quiche, bread and coffee.
Armed with our own macaron experiences in France including those by Alain Ducasse (or rather his pastry chef(s)), we gave Zumbo's version a go.....we were not disappointed. Zumbo plays with flavours.....Smarties, Passionfruit with Basil, Wasabi with Ginger, and Chocolate Mud Cake with Blueberry macarons are just some of his many innovations....
Visually, the macarons were beautifully coloured and of good, consistent size. Egg shell-like crisp on the outside and gooey soft on the inside - his macarons were perfect texture-wise. Flavours were light and slightly on the "too sweet" spectrum.... but not to the extent of being unpleasantly sweet.

With macarons like these, his reputation as the maestro of macarons is well deserved.

Email ThisBlogThis!Share to TwitterShare to FacebookShare to Pinterest
Labels: Food

Quirky & Gastro
Tong the quirky one & Keith the gastronomic gastroenterologist. The occasional indulgence in things we love; DESIGN, ART & FOOD brings us to many places. We collect myriad of things through travels and scavenging trips in flea markets & junkyards. Our home represents a journey of where we've been and a never ending journey of editing & curation. Would like to think our children (when we have children) has an heirloom through the things we collect when we're old. I hope at least something would be worth something! lol.. :)